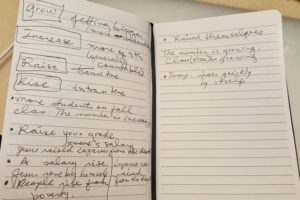 From the notebook of Paula Moura, Class of 2018

Note the trend: all three stories concern something going up, or getting bigger. But what’s the difference between grow, rise and increase?

To some extent — remember that English seems to have more exceptions than rules, and that almost no rule is true 100 percent of the time — it’s a matter of count versus noncount. You can’t count the economy; it’s one giant category. (But you can count the economies of, say, Western countries, since each has its own.) So the economy grows or shrinks rather than increasing or decreasing, or rising or falling. Prices and premiums, which can be counted, tend to increase (become larger in number) or rise (go up).

Nor would I say, as this student did:

The number of solar jobs increased by 75 percent to more than 250,000 in the last five years.

I’d change higher to more. But the number of jobs added is higher.

Average hourly earnings grew 3.2 percent over the last 12 months, slightly lower than the March figure but higher than in all but four months since 2009.

In this case, you could get away with any of the three — grew, increased or rose. But I would say slightly less than in March but more than in all but four months since 2009.

One usage of grow is relatively recent but now ubiquitous: How to Grow Your Business. Grow can be either a transitive verb (one that takes an object) or intransitive (one that doesn’t); in this case, it’s transitive. In the past, you would grow corn, petunias or any other crop.  You probably would have said you wanted to expand your business, revenues or market share, but in the last decade or so, it’s become more and more common to say grow. However much it grates on old-timers’ ears, this is an example of how language evolves.

When I was in the middle of writing this post, a second-semester student talked about “people who are growing their families.” I would have said people whose families are growing or people with growing (participial adjective) families.

Speaking of transitive versus intransitive verbs naturally brings up the often-confused raise and rise.  As verbs, raise is transitive and rise transitive. So companies raise prices, but the prices rise or are raised (passive voice). Both can also be nouns, which follow the same pattern: a raise is an increase in salary, while a rise simply means something has gone up (as in a rise in unemployment or the rise of technology).  To confuse you further, a pay raise is American English;  the British say a pay rise.) So when a recent graduate wrote that larger-scale projects are more sensitive to the price raise, she meant price rise.

And speaking of raise, it was once considered poor English to talk about raising children. “You raise cattle, not kids,” my high school English teacher would have said; more properly, children were reared or brought up. Similarly, if someone asked, “Where were you raised?” it would be more proper to to answer, “I grew up in  . . .” But, like grow your business, that use of raise is now more widely accepted, especially in casual conversation. When in doubt, check your style guide. (AP Style says “all living things, including humans, may be raised,” but “only humans may be reared.“)

Finally, there’s spike, meaning a sharp, sudden, often temporary increase, as in this subhed from The New York Times:

His interest income spiked in 1989 at $52.9 million, but the source is a mystery